Nearly two months after this MOOC I can at last say what I have learned. I had to do some digging, but happily I count two small finds and one big one.

(1) The Documentary Hypothesis is over. Per Jacob L. Wright, it has been surpassed by European scholars who use a slightly different method to uncover a passage’s historical strata.  They identify what was most likely the earliest verses and then identify later redactional layers. In the MOOC, Wright demonstrated the process whereby later, supplemental layers were identified using the text of Genesis 26. In his book, “David, King of Israel, and Caleb in Biblical Memory” (Cambridge University Press, 2014) he demonstrated the method using the stories of Saul and David. It is complicated, but watching Wright do it is impressive and convincing. What one finds in textual strata is at least, if not more illuminating than what archeologists find digging in the dirt.

(2) So perhaps that is why the course took a Minimalist perspective, and this was my second “find:” There are two schools of thought on the significance of what archaeologists dig up if it does not support the biblical account. Maximalists rely on the biblical account as written unless and until archaeology clearly contradicts it. If the Bible says that David and Solomon ruled over a united kingdom, then there was a united kingdom, whether we can find archaeological evidence of it or not. (So far, we cannot find archaeological evidence of it.) The Minimalists are prepared to be less convinced of the historicity of the bibilical account. So, if there is no evidence of a united kingdom, maybe there wasn’t one. (I needed to look outside the course to learn this: a very clear description of the Maximalist/Minimalist can be found here.)

Wright takes a minimalist position and uses Israel Finkelstein’s The Forgotten Kingdom, (SBL, 2013) to lay some archaeological groundwork. [Finkelstein has his critics. I wish Wright had mentioned them. I still have no idea whether Finkelstein holds a majority position, a minority position or if he is a total outlier.]

The course’s argument is that:

The Hebrew Bible has an overarching message and a unifying purpose of its own, acquired after and because of the defeat of Judah. That purpose is to sustain “peoplehood” – a community without a state  (i.e., no kings, no borders, no shared ethnic heritage.) The Biblical project, says Wright, is to “sustain subjugated, dispersed communities.”

The Hebrew Bible does not suggest a single correct way to sustain “peoplehood.” Being a people’s book,  it is multi-perspectival. What some see as internal differences or contradictions are in fact evidence of the Biblical authors’ commitment to the embrace of competing ideologies and perspectives. “The Bible,” Wright says, “does not speak with a single voice.” Instead, it sets forth a single text: a book of stories, memories, teaching aids and worship guides. It is not a “priest’s” book: it is the people’s book. It is the book that creates a people.

The Hebrew Bible posits an alternative to statehood sustained by alternative values. (Think 1 Sam. 8.) Towards that end, the Hebrew Bible redefines heroism and valor, it reconsiders gender roles and it expands and renegotiates the rights of persons and alien groups who wish to belong to this alternative nation.

For me, this is the “big find” because it means that when we are working with a liberative text in the Hebrew Bible – one that challenges patriarchy or privilege or power or violence – we no longer have to think of it as an exception or an aberration. It’s not. It is part of the warp and woof. It is part of the Bible’s purpose and raison d’etre.

That find is well worth all of the digging.

About the Bible’s Future…

Though not a scholar, I am reasonably well acquainted with the Bible and some, albeit outdated interpretive, theories. Nonetheless, I still had to work quite hard to follow this course. I am not sure I could replicate the method which Wright demonstrated with Genesis 26 or in his “David, King of Israel…” I find myself wondering whether my experience is generalizable, and if so, what that might mean for the future of the Bible as Wright understands it – as a people’s book. Can it still be a “people’s book” if you have to be a Ph.D. (“priest”) to understand it?

Maybe it is the Ph.D./”priests” who re-discover it, and then the question is: How do we restore this book to the people it was meant to serve? 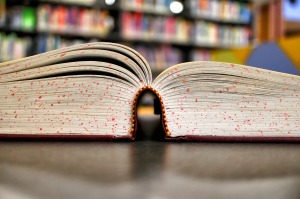 Since my last post I have either been getting ready for, or trying to keep up with the MOOC, “The Bible’s Prehistory, Purpose and Future” (Coursera & Emory University.)  It is excellent.

The MOOC is an opportunity to re-read the Instructor’s book, David, King of Israel and Caleb in Biblical Memory by Jacob L. Wright alongside other books and materials which provide needed context.  It’s a little humbling to read my first post on the subject of Wright’s book. Suffice it to say, the first time I read it, I did not get it. I get it much better now, and I think a third reading will be in order. It is very challenging, and very rewarding.  As I read I am reminded of Elisabeth Schüssler Fiorenza’s In Memory of Her: maybe because neither is easy to read, maybe because both change the way I think about scripture.  There is a place for both the iTunes version and the paperback. I am glad I have both.

Here is an interview with Prof. Wright that I found on Alan Brill’s blog, The Book of Doctrines and Opinions: Notes on Jewish Theology and Spirituality (August 2013.) I found it helpful.