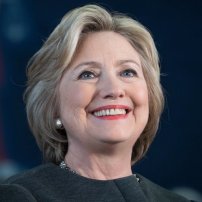 After watching the debate last night, I feel moved to say “thank you.” I believe you will be a history-making president, and not simply because of your gender. I wish my mother had lived to see your inauguration. She would have been 87 this year, and although she tended to vote (alas) Republican, the Republicans she voted for bore little resemblance to Donald Trump. I honestly think she would have been one of your campaign volunteers.

But back to what moves me to write this morning: my admiration and gratitude for your presence on the stage last night. It takes an enormous amount of personal strength and grit to take the high road when you are being taunted from the low road, in public, and by someone who demonstrates an endless and shameless capacity for lying. I know what it is like to be the object of a borderline’s angry lies. It is dispiriting to say the least. I can only imagine how difficult it is to deal effectively and graciously with such a pathology while the nation and the world is watching. Ann Richards on the subject of Ginger Rogers comes to mind, just as a place to begin.

Most of all, in the debate last night and in your campaign, thank you for calling us to be our better selves: for calling us less to “greatness” and more to personal and national goodness, and for doing the hard work of leading us in that direction. I look forward to the day when we can say: “Madam President.”